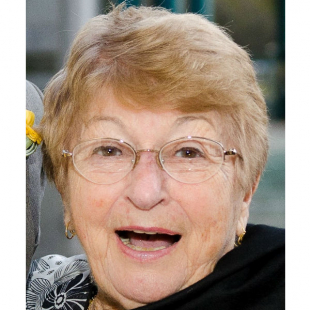 Roz Zimmerman, 94, a longtime resident of Utica, NY, passed away peacefully on November 15, 2020 at the Highlands Living Center in Pittsford, NY.

Roz was born in Brooklyn, NY, to Samuel and Sarah Rockoff. Roz and her family moved to Utica where their father, a tailor, was the founder and proprietor of Windsor Clothes. Tailoring was a skill that Roz acquired and passed on to her children. She attended Utica Free Academy and upon graduation, worked for the war effort at Griffiths Air Force Base in Rome, NY. After meeting her first love, the late Morris Zimmerman, at a USO dance, they were married in July 1945, after Morey returned from WW II in Europe. They enjoyed 48 years of marriage until his passing in 1993.

They settled in Utica, raising a family of three daughters. Roz worked as an Executive Secretary for several large corporations, but her true passion was art. A member and student of the Munson-Williams-Proctor Arts Institute School of Art since the early 1950s, Roz was an avid potter, jeweler, and water color painter. Her work was featured in many area shows and exhibited at the M-W-P Museum and School of Art.

Roz was an active member of RSVP’s Readers’ Theater and the Stanley Theater usher’s corps. She was often found volunteering with students in Utica, sharing her art skills and teaching reading. Later, Roz enjoyed singing and performing in the area and was featured in a TV commercial for an area hospital. Roz loved to travel the world and would often sing songs with the local children she met. She made many friends over the years, including her special companion, the late Thomas Castano, of Utica, NY.

Roz will always be remembered for her spunky sense of humor, generous heart, creative artistic talent, and joyous spirit.

She was pre-deceased by her parents, her beloved sister, Goldie (Klempner), and brothers Irwin and S. David.

Roz is survived and will be greatly missed by her children, grandchildren and great-grandchildren: Jo Ann Golden (Larry) of Wellesley Island, NY, and Bonita Springs, FL, and their family Rebecca Oppenneer (Mark, and sons, Tynan and Sawyer) and Joshua Golden (Colleen, and sons, Eli and Ethan); Sandra Citarella (Alan) of Pittsford, NY, and their family Allison Citarella (fiancée Darien Fields) and Andrew Citarella; and Kari Hoffmann (Richard) of Brewster, MA, and their family Laura Hall (Robert, and daughters, Olivia, Aleigha, and Eliza) and Matthew Hoffmann. She will be lovingly remembered by her many nieces and nephews, extended family, and friends.

Burial is private. A celebration of her life will be held at a later date.