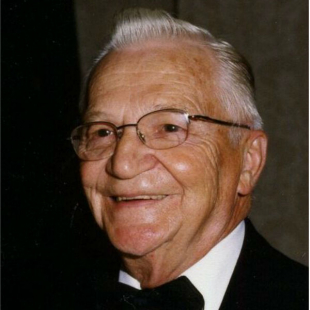 In Memory of Ronald W. White

He was born October 21, 1928 in Leonardsville, NY the son of Ernest and Ruth Larrabee White.

Ron spent most of his life in the Mohawk Valley, graduating from Whitesboro High School moving to Sherrill in 1975.

He was a Korean War Veteran, 1950-1954, serving in Europe for three years as a Staff Sergeant in Auditing, Cost Accounting and Budget at the Headquarters of the Air Force in Europe, Wiesbaden, Germany.

Upon his Honorable Discharge, he returned to the Mohawk Valley. He married Beverly Tournay August 6, 1955 at Tabernacle Baptist Church, Utica. In 1954, he became employed with Marine Midland Bank in Auditing and Branch Management and Lending for 35 years retiring in 1988. Upon retirement he was a Field Operations Supervisor for Special Place in the U.S. Census for the 1990 and 2000 Census. He also worked for Verona Labs, which he enjoyed very much.

Ron was a 50 year member of Tabernacle Baptist Curch serving on many committees including Chairman of the Board of Trustees.

He was a graduate of the National Bank Auditing and Control School at the University of Wisconsin and the American Institute of Banking, becoming President of the Utica Chapter A.I.B. in 1965.

Ron was a 50 year member of the Utica Masonic Lodge # 47 F & AM, previously serving as Secretary and a member of the Yahnundasis Bodies AASR. He was a Trustee of the Masonic Library and Museum of the Grand Lodge of the State of New York since 1993. A Meritorious member of the Doric Chapter 193 of Royal Arch Masons. Past Illustrious Master of the Rotica Council # 12, Current Treasure and Grand Representative of Iowa near the Grand Council of the State of New York of Cryptic Masons. Past Governor and Secretary of the United York College # 127, Past Puissant Sovereign and recorder of the Red Cross of Constantine, Utica Conclave, Past Sovereign Allied Mason Degrees, Past President of Oneida County Masonic Association, Past Master of the Charles Smith Council # 324, Allied Masonic Degrees, Past President of Oneida County Masonic Association. Past Patron of Silver Chapter # 21 (Order of the Eastern Star) and Past District Grand Lecturer of the Cortland Madison District as well as Past President of the Deerfield Lions Club and Past President of Upstate Cerebral Palsy.

The family wishes to extend their sincere thanks to Dr. Win and the St Elizabeth ICU unit staff and to Dr. Wight for all of their care of Ron.

Due to current health concerns and CDC guidelines, the funeral service will be private. Interment will be in Crown Hill Memorial Park.

In lieu of flowers, donation to Shriner’s Hospital for Children , 2900 Rocky Point Drive