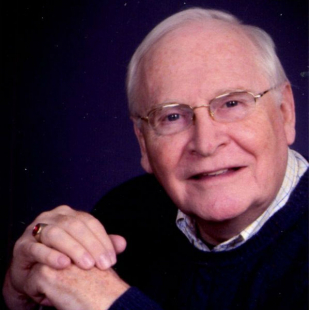 In Memory of Richard Rappleyea

He was born on September 16, 1939 in Norwich, NY, a son of Clarence and Mary Griffin Rappleyea. He was educated at Norwich City Schools, Hartwick College, SUNY Albany and the Sorbonne University of Paris, France. He married Jane Wilder August 19, 1961 in Sauquoit Methodist Church. She died on March 11, 2013. He taught French and Spanish at Vernon-Verona-Sherrill Central Schools and retired after 32 years from New Hartford Central School.

In 1972, he was selected by Rotary International to participate in the Group Study Exchange to India where he visited and spoke in schools in the Bombay (Mumbai) area.

Mr. Rappleyea was a member of New Hartford Presbyterian Church where he served as an Elder and was a member of the choir. He was also a member of the New Hartford Teacher’s Association, The American Association of Teachers of French, where he was the former President of the Central New York chapter. The AATF awarded him a scholarship to study at the Sorbonne in 1966. He enjoyed playing the piano, and he was a bassoonist in bands throughout high school and college.

He was predeceased by his parents, brothers, Clarence Jr. and Ron Coleman, and his wife Jane.

The family would like to thank his friends and parishioners of New Hartford Presbyterian Church for their compassion and support.

The funeral will be Friday at 10:00 at the New Hartford Presbyterian Church. Interment will be in Sauquoit Valley Cemetery. Calling hours will be on Thursday from 4:00 to 7:00 at Friedel, Williams & Edmunds Funeral and Cremation Services, 13 Oxford Rd., New Hartford.

In lieu of flowers, friends may consider the memorial fund of the New Hartford Presbyterian Church.