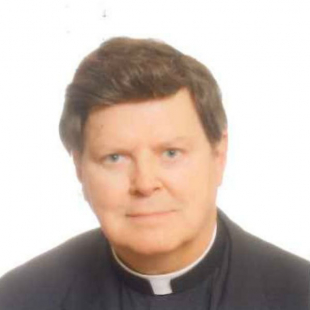 The Reverend Ralph J. Fraats, formerly of 113 Genesee Street and currently residing at the Sisters of St. Joseph, Rochester, NY, died on May 1, following a brief illness of Acute Myeloid Leukemia.

He was born in Utica on October 8, 1933, the son of Ralph S. and Beatrice V. (Murphy) Fraats. He was predeceased by his brother, Paul Fraats, US Army Intelligence in 1967.

Father was ordained by his Eminence Patrick Cardinal Boyle May 28, 1960, in the Cathedral of St. Matthew in Washington, D.C. In preparation for his priesthood, he studied at Niagara University, Catholic University of America, St. Vincent’s Seminary in Latrobe, PA.; St. Bernard’s Seminary in Rochester, the Pontifical North American College in Rome, and the Redemptorist Seminary of Marianella, Dublin.

Upon his ordination, he served the Archdiocese of Washington for ten years before transferring to the Diocese of Rochester in 1970 and served there until his retirement in 2001. In his tenure as priest in the diocese of Rochester, he served as assistant pastor of seven churches and was appointed in 1982 as pastor of St. John the Evangelist Newark Valley and St. Francis Catatonk. In 1986, he was appointed chaplain of Mercy Health and Rehabilitation Center in Auburn and Auburn Hospital Ministries/Cayuga Nursing Home. From 1989 until his retirement he was Parochial Vicar at St. Thomas the Apostle Church in Irondequoit until his retirement.

After retiring, he returned to Utica and served the Syracuse Diocese by assisting as priest-in-residence at the parish of St. John the Evangelist Church in New Hartford until the Fall of 2015. Upon leaving St. John’s the Evangelist parish, he assisted at Holy Trinity Church for a short time by offering the Tridentine Mass on Sundays. In 2016, Father joined the parish staff at St. Joseph & St. Patrick’s Church where he faithfully served until May 31, 2019, when he returned to Rochester due to declining health.

The hallmark of Father’s life was being a priest to the people whom he served, and he graciously administered the sacraments for nearly 60 years, especially the Sacrament of the Sick to many in their final hours on this earth.

Father was a charter and 3rd degree member of the Knights of Columbus, Msgr. R. K. Burns Council #11749 at St. Thomas Church, Irondequoit. He provided spiritual direction to the members and was instrumental in constructing a monument to the unborn. Moreover, he served as the Associate State Chaplain of the New York State Knights of Columbus from 2009-2011. In 2009, he was inducted as a member of the Equestrian Order of the Holy Sepulchre of Jerusalem Eastern Lieutenancy by Timothy Cardinal Dolan at St. Patrick’s Cathedral, NYC.

A public memorial for Fr. Fraats will be held at St. Joseph & St. Patrick’s Church, Utica, with the Most Rev. Salvatore R. Matano, D.D., bishop of Rochester, as celebrant at a time to be determined when local churches resume Mass schedules. Masses are requested for the repose of his soul and burial will be at Mount Olivet Cemetery, Whitesboro. Arrangements have been entrusted to the Friedel, Williams & Edmunds Funeral and Cremation Services, New Hartford, NY. “Well done, good and faithful, servant!” Matthew 25:21.