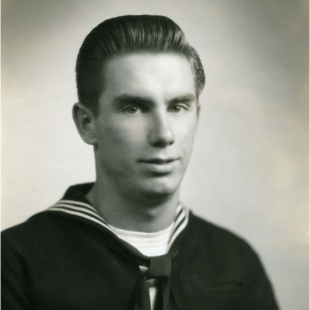 In Memory of R. Thomas Esrich

Tom was born December 13, 1927 in Newburgh, NY, to the late Robert and Rosebelle (Indzonka) Esrich. He moved to Utica as a child, graduated from St. Francis De Sales School in 1946, and attended Utica School of Commerce. Tom served in the US Naval Air Transport service state side, of which he was very proud of serving in “Uncle Sam’s Navy”. Tom worked for NY Central Railroad for 15 years, and walked to Utica National Insurance Co. for 28 years until retiring in 1993.

He was a founding member of St. Thomas Church, New Hartford. Tom’s Hobbies included in his youth diving and swimming, skiing, (water and snow) walking, playing the piano by ear, his favorite being Claire DeLune, and being a BB.

Tom was predeceased by his wife Ina, and his infant son Richard Thomas, his sisters Barbara Thomas and Delores Julian.

In keeping with Tom’s wishes there will be no public calling hours. Relatives and friends are invited to attend a Mass of Christian Burial on Tuesday at 11:00 AM at St. Thomas Church, 150 Clinton Rd., New Hartford. The family will receive friends following the mass.