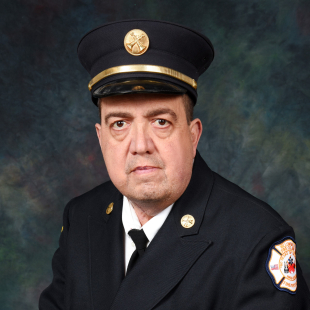 In Memory of Michael Stephen Siciliano

Michael Stephen Siciliano, 59, of New Hartford, passed away on January 6, 2023 after a lifelong battle with kidney disease and heart failure, among multiple other health concerns.

Michael was born on March 23, 1963 to Maryjane (Emma Malara) and Joseph Siciliano in Utica, NY. After Michael graduated from UFA in 1981, he gained his associates degree from MVCC, and then went on to join the Army and serve his country.

In 1989, Michael married Francine, and went on to have two children, Michael and Rebecca.

Mike served honorably as an active member of the Fire Company until October 26, 2020. He then transitioned to inactive life member status and was elected as a member of the Board of Directors. Mike was actively involved in all Board proceedings until his death.
Michael was predeceased by his father, Joseph L Siciliano, and his grandparents, Michael and Lucy Emma.

He is survived by his wife, Francine; two children, Michael and Rebecca; his mother, Maryjane Malara and his stepfather, Bob Malara; his grandson, Mason; brother, Joseph and wife Tanya, along with their children; and many other family members.

The family would like to send a special thanks to his dear cousin, LouAnn Fiore, for all the help and love she provided Michael during his life.

In lieu of flowers, the family is requesting donations to the Willowvale Fire Department, an organization Mike held close to his heart. Envelopes will be available at the funeral home or by mail at P.O. Box 69, Chadwicks, NY 13319.