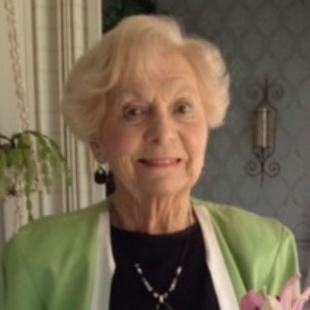 In Memory of Mary (Pellicciotti) Zappone

Born on October 13, 1927, in Amsterdam, NY, to the late Anthony and Lucia Malatesta Pellicciotti, Mary was graduated from Wilbur Lynch Senior High School in 1946 and the Amsterdam School of Commerce in 1947. She was employed as a Credit Manager at Montgomery Ward in Amsterdam until her marriage to Thomas Zappone on June 8, 1952, at St. Michael’s Church in Amsterdam. They relocated to New Hartford in 1964 when Tom became executive director of the Oneida County Industrial Development Corporation. He predeceased her on November 15, 1997.

Mary attended the First United Methodist Church of New Hartford where she had many friends. Attending Sunday service was a great way for her to show off an extensive wardrobe, including a vast array of high heels!

Mary loved to shop and took pride in her outfits and always dressed to the nines. Trotting around Sangertown Square shopping and having coffee and French fries were some of her favorite things to do. And let’s not forget how she enjoyed her Manhattans and wine!

Later in life, Mary was lucky to have a special friendship with Mike Natale, who kept her busy; they were often seen around town enjoying various outings, including happy hour, most afternoons! Mike, his sister Betty, his brother Louis and his niece Ellen from Texas embraced Mary like one of their own and brought great happiness to her life.

Molly Gibson also played a special part in Mary’s life. As neighbors for more than 30 years, they spoke several times a day by phone or sharing backyard conversations.

She is survived by two daughters, Patricia Convy of Alexandria, VA, and Nancy Zappone-Tan, and her husband, Robert Tan, of Cold Brook; a brother, Frederick Pellicciotti, and a sister, Grace Meacham, both of CA; and many nieces and nephews. She was predeceased by a son-in-law, John Convy, and two brothers, Robert and Anthony Pellicciotti.

The family would like to offer a heartfelt thank you to all the loving and caring staff at the Presbyterian Home. They would also like to thank Dr. Fred Talarico and Patricia Rosati, NP for all the care given to Mary.

In lieu of flowers, please consider a donation in memory of Mary to the Presbyterian Home.