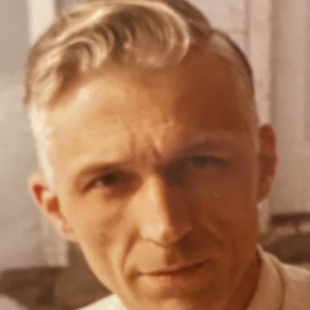 In Memory of Jerome F. Wagner

Jerome was born in Utica on September 8, 1929 the son of Henry and Marguerite (Mager) Wagner. At Trinity College Chapel, Toronto, Canada on July 5, 1969 he married Catherine Mary-Jane Fidler.

Jerome was a 1947 graduate of Utica Free Academy, then MVCC, with a degree in Mechanical Engineering Technology. He furthered his education at Oswego State Teachers College.
He enlisted in the US Coast Guard, reaching the rank of Petty Officer 2nd class. Jerome loved aviation, and flew planes during his time in the Coast Guard. He worked for the NYSDOT as a Civil Engineer and mapmaker. He retired after 37 years of service to the State, continuing to work as a freelance surveyor with his close colleague Chris Nash. He loved his profession, and always said “If you find a job you love, you never work a day in your life”.

Jerome was a contributing author to the Oneida County Historical Society, and was a lifelong student of history and geography. He was a member of the Utica Stamp Club, with a large collection that he kept meticulously. He traveled the world extensively, first with his brother Paul, then later his wife, visiting 15 countries. He was also a lifelong blood donor to the American Red Cross, donating over 187 Gallons of blood in his lifetime.
Jerome was a member of St. Mary's Church, Utica and then Our Lady of Lourdes, Utica.

In addition to close family friends such as the Greers, Lindachers, Schwenzfeiers, and Bagshaws, and colleagues over the years, Jerome fondly remembered his brother Richard and sister Joan; his predeceased brothers Paul and Robert, and sister Barbara. He will now see them again. Jerome is survived by his wife, two sons and two daughters: William H. and wife Jennifer Wagner, Essex Junction, Vermont; Sarah-Jane Wagner, Utica; John Paul Wagner, Buffalo; and Esther J. Wagner and her husband Kevin Hachey, Concord, North Carolina. He is also survived by 8 grandchildren.

Mr. Wagner's funeral will be held on Wednesday November 16, 2022 at 10:00 a.m.at Mary Mother of Our Saviour Church, (Our Lady of Lourdes). Burial will take place immediately following at the Calvary Cemetery, Utica, NY. Calling hours are on Tuesday from 5-7:30 at Friedel, Williams & Edmunds Funeral Home, 13 Oxford Rd., New Hartford, NY.

In lieu of flowers, donations may be made to the Abraham House. The family would like to extend a heartfelt thank you to Bayada Hospice, and the staff of Maple Ridge Lodge for all the loving care and compassion shown to Jerome.