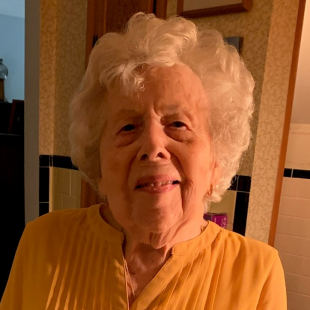 In Memory of Helen Hart Dudajek

Helen Hart Dudajek, a lifelong resident of New York Mills, died peacefully in the comfort of her home early Wednesday morning, Dec. 15, 2021, with her family in her heart. She was 95.

Helen was born Aug. 24, 1926, in New York Mills, daughter of Herbert and Mary Decker Hart, and graduated from New York Mills High School in 1943 as salutatorian of her class. As a young woman she worked at Wicks and Greenman in downtown Utica and later at Triad Tractor and Implement Co.

She married her high school sweetheart, Alex Dudajek, following his discharge from the US Navy at the end of World War II. They were married on Nov. 16, 1946, in St. Paul's Evangelical Lutheran Church in Utica, and enjoyed a blessed union of 72-plus years until his passing on June 21, 2019.

Helen was the consummate daughter, wife, mother and friend. Though she didn't work outside the home, she was the key player in a marriage filled with love and laughter, with a few hoots and hollers along the way. But through all the cheers and tears, there was a firm commitment that held it all together.

Helen and Alex were a team. And their unconditional support of one another – and their family – made that team a winner.

Besides family, Helen had a great passion for her church, St. Paul's and later Our Saviour, where she was long active in the choir and women's groups. She embraced a deep faith in God and passed that on to her children, grandchildren and great-grandchildren. Even in her final days, she never failed to ask about "the kids," and her eyes sparkled whenever she saw them.

Helen was the last of her generation. She was pre-deceased by a sister, Rena Starer, and two brothers, Russell and John Hart, and daughter-in-law, Susan Hauck Dudajek.
The family extends a very heartfelt thanks and deep appreciation to Helen's incredible caregivers – Bianca, Cheryl, Cyndy, Leela, Liz, Katherine, Kim, Tammy and Tatyana, who provided her a quality of life right to the end that would have otherwise not been possible. They will forever remain in the family's hearts.

There will be no calling hours. A private service will be held for the family at Our Saviour Lutheran Church with Pastor Anita Mohr presiding. A memorial service will follow in the spring at a time to be announced. Arrangements are with the Friedel, Williams & Edmunds Funeral and Cremation, 13 Oxford Rd., New Hartford.