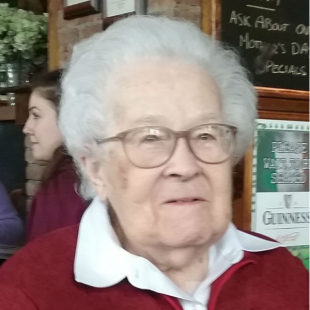 In Memory of Elizabeth B. (Betty) Nicholson

Elizabeth (Betty) B. Nicholson, 97, of Whitesboro, NY passed away on September 18, 2019 at St. Peter’s Hospital, Albany NY, with her family at her side.

Betty was born on August 1, 1922 in Springfield, VT, daughter of Floyd M. Banister and Clara M. Hook. She now joins her late husband of 63 years, Thomas K. Nicholson, Sr.
Betty grew up in Troy, NY and was valedictorian of her class at Troy High School. She graduated from Russell Sage College, Troy, NY and was a secretary at Troy Savings Bank. She was a stay at home mom and when the family relocated to the Utica area she reentered employment as a secretary at the Utica Area Council of Churches and Plymouth Bethesda United Church of Christ.

After retirement Betty and Tom traveled the United States and Europe. They attended many Imperial Sessions of Shriners International. She and Tom were also anointed with the waters of the Arctic Ocean while traveling to Scandinavia. Betty had so many friends who were always ready to go out to dinner or have a fish fry and gave her so much joy.
She was a member of Tabernacle Baptist Church and Uarda Temple, No. 24, Daughters of the Nile.

Surviving Betty are her son, Thomas K (SueAnn) Nicholson, Jr. of Ballston Lake, NY and her daughter Carol (James) Gowans of Whitesboro. Also surviving are grandchildren Thomas K, (Jennifer) Nicholson, III of Bethesda, MD, Christopher B. (Amy) Nicholson of Middletown, DE, and Emily C. (Sean O’Hara) Nicholson of Madison, AL. She is also survived by three great grandchildren, Zoe, Logan and Harper. She was predeceased by her special cousin Kenneth Walker.
After Tom’s passing Betty continued to live in the home she and Tom built. Her son-in-law James was always ready to make dinner for Betty or do any chore she needed done. Betty and her daughter-in-law SueAnn grew exceptionally close over the last four months as SueAnn was Betty’s primary caregiver after Tom and SueAnn took her into their home to give her the security she needed.

And we can’t forget the menagerie of pets who grew to love her too, including Baroness, Gabriella Star, Quincey and Sir Valiant while staying with SueAnn and Tom as well as Molly, Annabelle and Chessie in Whitesboro.

Funeral services will be held Tuesday at 10:00 AM at Friedel, Williams & Edmunds Funeral and Cremation Services, 13 Oxford Rd., New Hartford. Friends are invited and may call on Monday from 4-7 PM. Interment will be in Memory’s Garden, Colonie, NY on Saturday Sept. 28, 2019 at 11:00 AM.